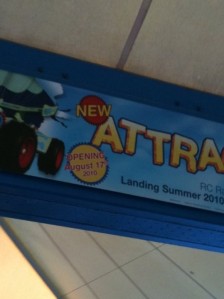 Signs in the car park at Disneyland Paris show the opening date of this expansion of the Walt Disney Studios as August 17th 2010. Expect soft openings to start a few weeks before this date meaning that DLP should have this ready to play some part of the busy summer period.

Another major plus of having this attraction ready sooner rather than later is the imminent release of Disney Pixar’s Toy Story 3.

With the change of Buzz Lightyear’s Pizza Planet in the Disneyland Park from a counter service restaurant into an all you can eat buffet the resort certainly seems to be relying on TS3 to be a big hit with audiences across Europe.

Another wonderful shot that I found online come courtesy of Forum ThemeParks and shows the construction of Toy Story Playland from the air.